Book > Academic Books > Cultural Politics
Due to global supply chain disruptions, we recommend ordering print titles early.
SAGE online ordering services will be unavailable due to system maintenance on June 26th at 8:30 pm Pacific / 11:30 pm Eastern for 30 mintues. Thank you for your patience and we apologize for the inconvenience. 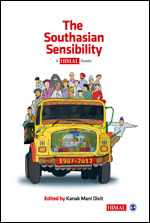 Share
Courses:
Cultural Policy and Politics
September 2012 | 352 pages | SAGE India
Download flyer
The South Asian Sensibility: A Himal Reader is a collection of some of the best articles published over the past 25 years in Himal Soutasian, South Asia's first and foremost regional news and analysis magazine. The essays are fine examples of long-form journalism, a form that Himal has pioneered in South Asia.

Intended to mark the 25th anniversary of the magazine, the book argues for a regional sensibility when looking at issues in the subcontinent. The effort, throughout, is to look at issues from a humanist and progressive viewpoint with a strong emphasis on human rights. The select articles, while discussing topics such as nationalism, regionalism, insurgency, human rights, social and cultural matters, reflect one common aspect that Himal has striven to promote throughout its existence, i.e., to view the entire South Asian region as a single, holistic entity even while respecting the integrity of its component parts.

The best of Himal... a good reader to dip into...what strikes one the most while going through the book is the relevance of these essays to our times, the realities they present to the reader impact our politics, society and culture some 15-20 years later.