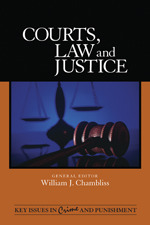 The 20 chapters in Courts, Law, and Justice cover a wide range of sharply contested topics, including drug and gun control laws as well as the ins and outs of the criminal justice system as encountered by arrested suspects, during the trial process, and during the sentencing phase. This volume looks closely at Miranda rights and the impact of polygraphs and DNA testing; legal and procedural issues during prosecution, including exclusionary rules and double jeopardy; and sentencing and punishment for crimes, including for offenses such as DUI and sex offenses. The role of the victim during the prosecutorial process is also examined.

Addressing such engaging topics as asset forfeiture, DNA evidence, double jeopardy, expert witnesses and "hired guns," eyewitness testimony and accuracy, insanity defense, the jury system, mandatory sentencing, plea bargaining, polygraphs, three-strikes laws, and more, the authors of this volume all closely examine the development of the justice system and consider the key opinions supporting or contesting the laws and policies used during investigation, prosecution, and sentencing.

Each volume consists of approximately 20 chapters offering succinct pro/con examinations, and Recommended Readings conclude each chapter, highlighting different approaches to or perspectives on the issue at hand. As a set, these volumes provide perfect reference support for students writing position papers in undergraduate courses spanning the Criminal Justice curriculum. Each title is approximately 350 pages in length.