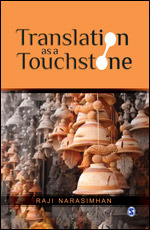 Share
Courses:
Introduction to Cultural Studies
January 2013 | 204 pages | SAGE India
Download flyer
Translation as a Touchstone focuses on translation as a creative process, where Narasimhan proposes that translation is an art of highlighting the complex relationship that arises between two languages, their cultures and sensibilities when they are positioned as a main language and a target language. The implications of this proposition are far-reaching, as Narasimhan argues in this book. The place of English in translation exercises in India is an implicit theme, where translation is an act which consolidates the terrain between two linguo-cultures.

English, as argued, is a touchstone language, and in a multi-cultural country like India, this hold of English adds weight to the case for transliteration. With the examples of Vijay Tendulkar's plays and Arundhati Roy's The God of Small Things, Narasimhan argues that transliteration not only can but also should extend to wholesale incorporations of Indian language interludes into English translations. Through a comparative study of original passages and phrases in literary texts along with their translated equivalents, she has followed a multi-pronged strategy and has used, as methodology, the comparative analysis method.

Though the target language is more than one in two of the works discussed in the essays—Samskara, by U. R. Ananthamurthy, and Chemmeen, by Tagazhi Sivasankara Pillai—Narasimhan incorporates multiple ways of looking at the translations and does not focus on any one language in isolation.

Introduction: Some Possible Approaches to Translation
Chemmeen: Its Passage through Three Languages
Negotiating the Language Divide
A Misleading Simplicity
The Implications of Bilingualism
The Road to Rebirth
The God of Small Things: A Wrong Book to Translate
Index

Raji Narasimhan’s reading is a thorough one like a microscope moving systematically over semantic and stylistic details…Close-examining word by word and line by line, she stitches together her observations to aid the interested reader. Each translation according to her is a second voice, a complementing voice. After all, translation is a creative act in itself.

The Hindu
[The book] reveals traces to expertise....Narsimhan’s reading is a thorough one like a microscope moving systematically over semantic and stylistic details.
The Hindu, 16 July 2013

[The book] focuses on some of the classics of Indian literature and examines them in terms of their afterlives....Translation as a touchstone promises to be of relevance…has a very important role to play in redesigning and updating our pedagogy and making it more relevant to our Indian societies.

One Such book that will appeal to both theorist and practitioners in the field of Translation Studies. The author easily dons the caps of literary critics, author and translators, as she seamlessly moves between these areas with skill and élan. What immediately strikes one is her theoretically stance on literary translation....An ideal study material for all scholars of translation…strongly recommended for its original and refreshing take on what constitutes a good translation within the framework of Difference as the trademark of a translation.